Dr Walshe's discovery of these drugs is no accident. It has resulted from a perseverance and dedication to improve the lives of Wilson's disease patients, and an immersion in the techniques of clinical and analytical chemistry. His early training in paper chromatography resulted in the observation of D-penicillamine in the urine of (non-Wilson's disease) patients receiving penicillin and led just a few years later to the hypothesis that the arrangement of atoms in D-penicillamine meant that the molecule would bind with copper ions, and hence act as a chelating agent. With the therapeutic acceptance of D-penicillamine, Dr Walshe began pioneering work on copper metabolism using radioactive copper, and he has also published on the mechanism of action of D-penicillamine and of trientine.

Experimental investigations were combined with clinical work on the diagnosis and treatment of Wilson's disease. In 1957, John Walshe was appointed to a post in the Department of Experimental Medicine, University of Cambridge with an honorary consultant appointment at Addenbrooke's Hospital, Cambridge, where he specialised in the treatment of Wilson's disease until 1987 (and thereafter at The Middlesex Hospital, London until 2000). In this century, he has continued to be involved with his former patients from his home in Cambridgeshire, and, happily, is able to attend the annual meeting of the Wilson's Disease Support Group – UK.

On the occasion of his 100th birthday in April 2020, appreciation of Dr Walshe's outstanding legacy to medicine was celebrated in a booklet containing tributes and birthday greetngs from his former patients both in the UK and worldwide. The booklet was presented to Dr Walshe by his friend, former patient and Secretary of the Wilson's Disease Support Group – UK, Mrs Valerie Wheater. 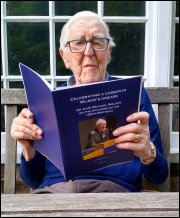